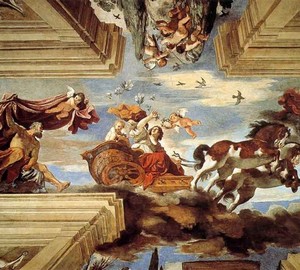 Aurora Hall – Giovanni Francesco Barbieri Gverchino. Around 1621
Gverchino lived in Rome from 1621 to 1623. During this period, he created several wonderful works, including frescoes on the ceilings of two floors of the Ludovisi villa, ordered by Cardinal Ludovisi, nephew of the Pope. The fresco of Aurora (1621-1623) adorns the ceiling of the lobby, where the artist’s skillful architectural “declips” frame the picture and create the effect of an open sky. Rushing through the morning sky on his magic chariot, Aurora throws flowers and accelerates dark night clouds away under the gaze of his elderly wife Tighton.