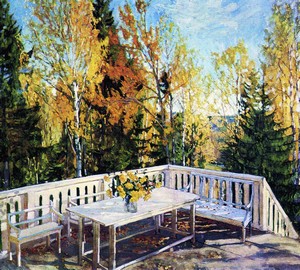 Zhukovsky is a talented painter of Polish descent who worked for a long time in Russia. He became known as the author of lyrical landscapes, often depicting bar and aristocratic estates.

For the turn of the century, nostalgia for irrevocably departed times and lifestyle is characteristic. A typical manor life gradually dies and becomes a relic of the past. Many estates were desolate, as residents either spent most of their time in cities or even went abroad. Longing for the past and some of its idealization are reflected in many paintings of this master, including in this canvas.

On it, the viewer sees the terrace or veranda of a large country house located on a hill. Only part of the terrace with a steeply down stairs is visible. Her steps are not visible, but the angle of inclination of the railing suggests that she is there, and she goes down very sharply. A colorful autumn forest or park is spread behind it, and blue is visible in the gaps between the trees. Most likely, this is a river – a motive that is also often present in the paintings of this artist.

Apparently, the manor is still inhabited. There is still summer furniture on the terrace, and a vase with large yellow roses remains on the table. Their color echoes the autumn colorful flowering of foliage on trees. The benches have beautiful carved backs, and two of them are small, obviously childish – a family with babies lives in the estate. But on the floor of large stone plates lie fallen autumn leaves, so it can be assumed that the family is already going to leave the summer house.

On the floor there are long purple shadows that emphasize the season and create the necessary contrast with both a light shade of plates and bright colors of autumn trees. In the garden, flexible lace birches clearly loom against the background of dark, almost black mighty spruce. It looks very beautiful against the background of the still blue, fairly clean sky with light, translucent clouds. The sky glows to the horizon, which, combined with shadows and a complex perspective, creates a sense of presence, and also fills the picture with air and space.

It seems to the viewer that he himself is standing on the doorstep of a room facing the veranda and looking into the autumn picturesque garden. This creates a very interesting impression, because a person can swear that they feel the aroma of wilting nature, yellow roses and fallen leaves on the floor of this terrace, characteristic of autumn.