“Baby parents at the grave of his son,” Vasily Grigoryevich Perov – overview of the painting 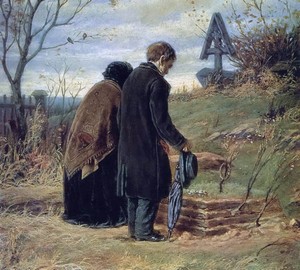 Old parents at the grave of their son – Vasily Grigoryevich Perov. Oil on canvas. 42 x 37.5 cm

Perov is a great master of genre and portrait art. Each of his characters is realistic, truthful, characteristic and necessarily with the expression of feelings and emotions.

His picture of the old parents according to the famous novel I. is saturated with special sympathies. WITH. Turgeneva “Fathers and Children.”. This novel once made a huge impression on the minds of progressive people, especially since it was written during the period of great reforms. Under the influence of the plot of the nihilist Bazarov, the painter Perov also appeared, which resulted in a sad and wise canvas about the old parents on the grave of his son.

In the cemetery, near the grave of the son, two old people are depicted to the audience with their backs. But, thanks to the author’s great talent, there is no need to show their faces.

In their drooping, hunched figures, all the feelings of parents who buried their child are expressed. The surrounding nature is not bright, in muffled tones, but also not gloomy. She is serene and eternal. The landscape is prescribed as realistically by the author – every detail of the composition, every blade of grass and branch.

Judging by the grave already overgrowing grass and trees, the son has been buried for a long time. Once the inconsolable grief of the elderly passed into quiet sadness and humility of that unjust but inevitable fate that was destined for them all. A young man – to lie in the ground, and to old people – to live without the only support in their lives.

But, nevertheless, in this dramatic and sad story, the artist depicted the figures of old people full of inner dignity. And also full of love for his sinful, rebellious, passionate, but with a great heart and kindness to people, son.

It is interesting that at the beginning of his plan, the painter wanted to show his parents face to the audience. A father with a low head down, and a mother kneeling near the grave. But then, he changed his mind, and the picture became known in this version.