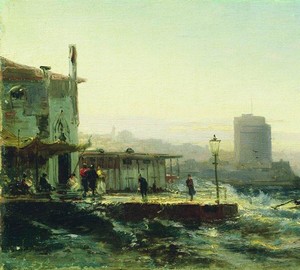 Baku. Embankment – Alexey Petrovich Bogolyubov. Oil on canvas. 20.8 x 33 cm
The officer and brilliant artist-marinist Aleksey Petrovich Bogolyubov traveled a lot, having traveled all over Europe, visiting the northern and southern seas. He spent a lot of time traveling around Russia, swimming in the Volga, making maps of the shores of the Gulf of Finland and the Caspian. He conveyed all his impressions and emotions in his paintings.

Walking in the old areas of Baku and the seashore, admiring the mosques and palace of the Khan, the Maiden Tower, the artist was subjugated by the history and beauty of the ancient city, its welcoming and colorful eastern atmosphere. He wrote a series of paintings dedicated to Baku, among which this type of embankment.

Summer morning. The high sky is gradually brightening, changing its color from yellowish-silac to light azure. A thin lavender strip of clouds hides behind the horizon, a slight haze slowly dissolves in the air, allowing you to distinguish between urban neighborhoods spread on the shore. The slender silhouette of the Maiden Tower is already clearly visible.

A fresh wind flutters flags on the masts of ships standing at the pier, rips off white foam from the tops of the waves, pouring in the morning light with deep blue-green and dark-biryuz hues. The sun’s rays of gold glare play on the sea surface, are reflected in the water pouring the part of the embankment protruding into the sea and a lone lamp standing on the very edge.

The sea is a little stormy, but gusts of wind are already subsiding, and fishermen in boats are in a hurry to go fishing. The oars rise and drop in, the lowered sail is still fixed on the mast.

Relying on a cane, a young man looks after the fishermen. Not far from him, a man in dark clothes catches fish with a fishing rod.

On the promenade, they stand very close to the water at home. About one of them, with high stone walls, is talked by several people. The rest quietly talk, sitting under an olive canopy stretched over thin poles.

In the morning silence, the voices of people, the splashing of waves and the piercing cries of gulls flying low above the water are well heard.

The artist conveys the melon of the early morning with the help of a calm, non-small palette – a harmonious combination of coniferous-green, olive-swamp, pistachio shades with dark yellow and blue halftones underline the details of dark brown color.

And the master uses different writing techniques – light, almost imperceptible strokes for the sky embossing, and strong, confident for the sea.

The master created a very poetic and romantic landscape, filled with a slightly mysterious and enchanting atmosphere of the East.