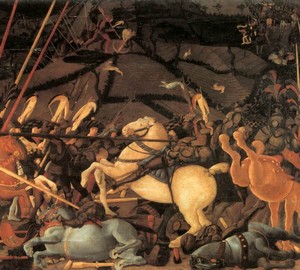 The Battle of San Romano – Paolo Uchello. Around 1438. Wood, tempera. 180×323
The presented picture of the artist Quatrocento Paolo Uchcello (about 1397-1475) is one of three that he wrote on this topic and stood at the origins of the battery genre in European art. All these works, ordered by Leonardo Bartolini Salimbeni, who took part in the battle, depict the moments of the battle of Florentines with the Siena, which happened in 1432.

In the picture “The Battle of San Romano”, a Florentine knight kicks out the leader of the enemy army, Bernardino della Chard, from the saddle. The leader of the Florentines, Niccolo da Tolentino, who was seated on a white horse, had already knocked over one of the enemies to the ground. Around is a battle, “has mixed in a bunch of horses, people”, spears and crossbows are swept, knights and their weapons are flying to the ground.

The tension of the whole scene is also given by the fact that many figures fit in a small space, and the composition is deliberately cut off by the frame along the edges, which seems to her that she is crowded in the allotted limits. Uchcello portrays his characters in a variety of poses. Probably, in order to practice this skill, he took up the work. The red horse on the left, galloping away, gray, with the knight falling with him, white, on which the leader of the Florentines sits, show how much the artist coped with complex angles and perspective. The dynamism of the entire scene is emphasized by the color, in which bright, clean colors collide.