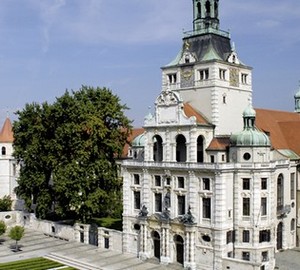 One of the most famous and interesting museums in Munich is the Bavarian national Museum, the Foundation of which was laid in 1885, king of Germany, Maximilian II.

Bavarian Museum will tell its visitors a lot of German history. It presents various sculptures as well as collections of folk-applied art. Before his death, king continued to replenish the collection of the Museum, and a few years after his death the exhibits became so much that I had to build a new building for the Museum, whose architect was Gabriel von Seidl. The construction of the new building of the Bavarian Museum was completed in 1889.

At the entrance to the Museum stands the statue Luitpold, who was a significant figure in the country, and actually ran to her. He was the brother of king Maximilian.

Sculpture collection of the Bavarian Museum is very diverse and very impressive. Here you can find sculptures that date back to the early 15th century. One of the famous exhibits of this collection is “Seensca Madonna”, made in 1430, and is the most famous sculpture in the world the mother of God of the middle Ages. Here are works made in the style of Baroque, Gothic, Rococo.

With regard to the collection of applied art, it is in no way inferior to the above. Here visitors of the Bavarian national Museum will find a variety of products and crafts made from porcelain, gold, silver and even ivory. In the hall of applied art is the largest collection of Christmas Cribs (another name for Nativity scenes). Visitors will learn about the techniques of their production, very entertaining.