“Bedgehog in the Village”, Vasily Grigoryevich Perov – overview of the painting 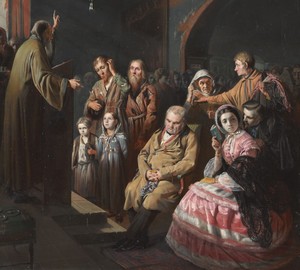 Sermon in the village – Vasily Grigoryevich Perov. Oil on canvas. 69.3 x 59.3 cm
The painter Perov masterly owned not only the artistic technique of performing paintings, but also was a subtle psychologist who saw all the shortcomings of the difficult life of poor people, the arrogance and swagger of the rich, the duplicity of church ministers.

His theme of church preaching, written in 1861, when, finally, hateful serfdom was abolished, becomes socially directed and with deep content.

A rural little church on a weekend, where the clergyman reads a Sunday sermon. He talks about the heavenly paradise, waiting for a rich landowner, peacefully dormant in the front row. And about the underground hell that will swallow the poor peasant who does not comply with the laws of God.

In confusion, a man scratches his head, perhaps reflecting on the injustice of this life. And the landowner has nothing to worry about, he has lands, souls, land, wealth. Even his dream is guarded by a devoted servant, pushing the pushing parishioner away from the owner.

The young girl is all the more uninterested in spiritual searches, she will gladly listen to the gentle whispering of the young man than the sermon of a boring priest.

Perov’s brilliant masterpiece as a mirror reflecting all segments of the Russian population. Moreover, reflecting the very essence, the whole ins and outs of the society that had developed by that time, rotten and deceitful. Extremely difficult – for the life of a simple people. Unproven and acceptable – for wealthy moneybags.

This magnificent work was a diploma for Perov, he received a gold medal of the academy for her and immediately declared himself as a modern and progressive member of society, as an artist with critical views.