“Before the attack. Under the Plevena ”, Vereshchagin – overview of the painting 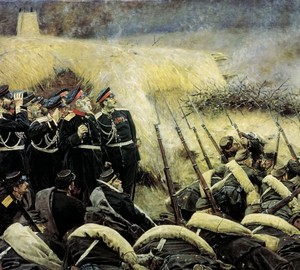 The Balkan series of Vasily Vasilievich Vereshchagin is the pinnacle of the master’s work. Being a recognized balalist artist, Vereshchagin constantly surprised contemporaries with innovative finds, striving for greater realism and sincerity in writing military operations.

The bulk of the work of the cycle was created in France around 1878-1879, however, some were written a little later. Picture “Before the attack. Under the Plevena, ”she saw the light in 1881, when the impressions of the Russian-Turkish war were no longer so acute and painful.

The Balkan series has approximately 30 paintings consisting of several groups, each of which includes several works combined in meaning and idea. A group of paintings dedicated to the notorious assault of Plevna deserves special mention. Vereshchagin’s work “Before the attack. Under Plevna, ”says about the last moments before the Russian army’s throw at Turkish positions.

A picture appears before the viewer: in the foreground, the line of Russian soldiers is visible. They lie tight, shoulder to shoulder, united in a single diagonal line, which makes the line seem infinitely long, leaving the horizon. Warriors are ready for battle and are waiting for the team to attack.

On the left you can see a group of people who are members of the Russian command. Among them, an elderly person with gray whiskers stands out – most likely, General Mikhail Dmitrievich Skobelev. His noble face expresses concern and concentration, because it is on his decision that the success of the third assault of Plevna depends.

The color palette of the picture is purposefully scarce and uniform. This technique, coupled with a panoramic solution, helped the artist increase the anxiety and special tragedy of the events.

In the background are torn, crippled trees that seem to be a symbol of what will happen during the attack. After a grueling struggle and taking the Turkish redoubt, the Russian army will be forced to retreat under pressure from the enemy, losing almost 13 thousand soldiers.