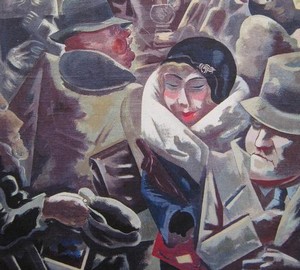 Berlin Street – Georg Gross. 1931. Oil on canvas. 81.3×60
A German artist who has lived in America for a long time combined the features of expressionism, futurism, New Materiality and Dadaisma in his painting. A street, a city and a man in a country in crisis are the main topics of his work in the years when the painting “Berlin Street” was written.

The faces and gestures of people filling Berlin Street are grotesque, not without reason Gross (1893-1959) worked as a cartoonist. In the foreground, a beggar war disabled person asks for alms, a smug layman hastily, on the go, fumbles in his inner pocket, and then he goes, not stopping, his painted and well-dressed companion. Poverty and wealth collided and will soon disperse. In the background you can see how the “nutro” restaurant falls out onto the street. The space of the picture is sealed with closely written figures and objects, and the color is monotonous, only occasionally flares up red, yellow and blue, introducing a restless note into the depicted. People seem to be herring in a barrel into which they climbed of their own free will, but are not able to get out. Gross’s psychosocial art conveyed the atmosphere of German society on the eve of the Nazis coming to power.