“Between the lessons,” Bogdanov-Belsky, “overview of the painting 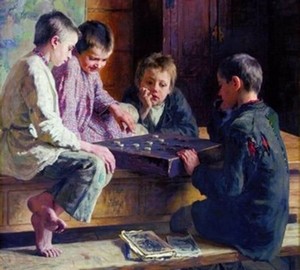 Between the lessons – Nikolay Petrovich Bogdanov-Belsky.

Once, a poor boy in simple peasant clothes, Nikolai Petrovich Bogdanov-Belsky came to school. Two years of study at the famous creator of public schools Rachinsky S.AND. – professors and a public enlightener – left an indelible imprint and determined the future of the artist. Rachinsky Sergey Alexandrovich, the most educated person of his time, a teacher from God.

Having preserved good memories of these years for life, Bogdanov-Belsky many and often draws children at school. Rachinsky School was a center of culture for all rural residents, both adults and youth came there, read newspapers and books, listen to teachers.

In his schools, created on their own funds, the simple children of the peasants were able to learn oral counting, drawing, Church Slavonic writing and singing, botanist.

At the same time, the school paid great attention to the general heart and friendly atmosphere between the teacher and the student, respect for the identity of each student.

Therefore, the picture “Between the lessons”, which depicts a group of children playing checkers, is very natural for their friendly atmosphere. It doesn’t matter at all that the interior of the room is very simple, one might say, even wretched – a wooden unshaded shop, an old cracked locker, and a map hanging on the wall from the boards is also “worched views”.

But the “heart” of the picture is four boys united by friendly and benevolent emotions. This positive is emphasized by the artist and due to lighting – the room is flooded with sunlight.

The guys are passionate about the game that happens during the break, between school lessons. This is also evidenced by the books lying next to the bench. There is still time to plunge into a fascinating battle before the lesson.

The first player, a boy in bast shoes and in dilapidated clothes, made a move and awaits the opponent’s response. Another kid playing with white checkers seems to be winning. His joyful expression and a happy smile are a confirmation of this.

Players also have two fans who also gamble and with interest follow the checker.

Such a seemingly simple plot, but he attracted and interested Emperor Nicholas the second. The well-known fact that the work of Bogdanov-Belsky “Between Lessons” was acquired in the personal collection of the sovereign.

Thanks to the talent and good heart of the author, we have a warm, bright canvas in front of us, lively with the happiness and smiles of children.