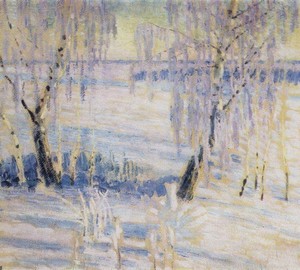 Iney, 1918 – Igor Emmanuilovich Grabar. Cardboard, butter. 48 x 60 cm
Igor Emmanuelovich Grabar wrote more than a dozen landscapes dedicated to winter: the author created hundreds of paintings reflecting his favorite time of the year. He has two paintings called “Ear” (the first was written in 1905, and the second, which will be discussed in 1918).

Both are written in the style of impressionism (or, as the author emphasized, divisionalism): small point strokes that add up to the air and light landscape. Fractional strokes helped the artist capture the ripple of the color and radiance of the sun, convey the beauty of snowflakes sparkling in reflections.

By 1908, the author compiled a collection of paintings in his workshop, which was called “Eine Day”, but continued to paint this natural phenomenon and further for many decades. There was not a day when he did not capture the new image of the Yine in his collection.

The canvas depicts two tall birch trees with branches hanging to the ground, littered with snow. Crystal frostbite, clinging to the bark of trunks and branches, plays the sun with all possible colors. The refracted light found with snow-white branches gives the impression of a rainbow shining around the trees. The rays of the sun seem golden, and they are reflected in the branches of birch and small shrubs glazed in the frost.

The birch on the left is in the recess, and the snow in the hole surrounding it looks dark blue, even brighter than the pastel strong-golden sky. A little further to the far edge of the picture, behind the birch on the right, is the same symmetrical recess that creates a compositional arch. It does not seem to be melted snow, because due to the congestion of the branches, it is obvious that there is a crackling frost.

The painting is located in the Astrakhan Art Gallery. Two other works of the artist are also exhibited there: “Between the columns” and “Portrait of the composer Prokofiev”.