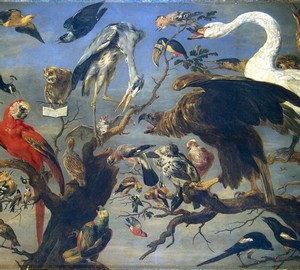 Bird concert – France Sneiders. Around 1630-1640. Oil on canvas. 136.5×240
France Sneiders (1579-1657) is the largest still life master and animapist artist of Flanders of the 17th century. The plot of the painting “Bird Concert” goes back to the bass of Ezop “Owl and Bird”. Under the control of the owl, in front of which a notebook is opened, birds try to sing. Precisely transmitted color. features of the structure and plumage of different birds: from a small fishing rod and a dove-lower to a colorful Amazonian parrot and a peacock with a beautiful wide tail. The canvas presents both inhabiting European forests, fields and water expanses, as well as more exotic, ornamental birds. Several dozen large and small birds are freely placed in space, forming a bright colorful ensemble against the background of light clouds.

Under the influence of Sneiders, the theme of “Bird’s Concert” has spread widely in the Flemish art of the 17th century.