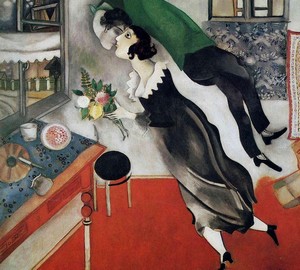 Not a single critic sought to find an explanation for the fact that in many Chagall’s works his heroes were floating, hanging in the air. This has become a kind of style mark, a hallmark of a painter. The birthday picture also shows us two flying people who are undoubtedly in love with each other.

In the cramped space of the room, young people seem to lack space – they rise above reality, so the room seems even smaller. The most significant element in the work is the figure of a man, unnaturally curved, drawn to the lips of his beloved.

Freaky manner of writing, some ridiculous and at the same time unusually harmonious style, makes you carefully peer into the details of the picture and find every second something noticeable – an unusual rug over the bed in bizarre patterns, white wall, dotted with dimming, iridescent texture dress of a girl, ending with a sharp geometric collar, bright red floor, modest atmosphere, in which geometric shapes are hidden, (circles and rectangles) and much more.

The painting was written in 1915, in that happy period when Bella’s beloved became Shagalu’s wife. Without a doubt, in this work he portrayed himself and his beloved – their happiness makes us tear ourselves away from the earth.