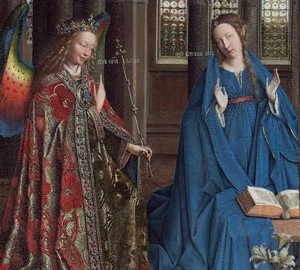 The painting “Bratification” was created during the heyday of the work of the Dutch painter Jan van Eik. At this time, the author bought a house and a workshop in Bruges to stay there until the end of his days.

The story of the appearance of the picture is as follows – the painter prepared a gift for the Duke of Burgundy, Karl Smelom, one of the most heroic representatives from the famous Valois dynasty. The gift was a big triptych on a religious plot. Unfortunately, to this day, “survived” only one fragment of a rather large-scale work – the left sash.

It is not known under what circumstances 2/3 of the triptych was lost. We only know that van Eik sent his gift to Dijon, the capital of Burgundy in those days, to the Shangmol Monastery, where church masses served.

Annunciation as an event is a key moment in the history of Christianity. The Annunciation was followed by a change of covenants: the covenants of Moses were replaced by the era “After Grace” (Sub Gratia). Due to the importance of the event, this plot was very often repeated among artists of the Renaissance.

The van Eika option is characterized by lyrism and attentive attitude to detail. The audience sees the Virgin Mary and the archangel Gabriel, but here they are not depicted as real personalities. Comparing the size of the figures and the architecture of the background, you can see that the Virgin Mary and Gabriel are depicted by giants – the heads are almost taken to the capitals. The columns behind the back of the characters are noticeably rounded, so what can be assumed – van Eik depicted the altar. Perhaps the lost part of the triptych portrayed the priest, and the giant figures of Maria and Gabriel are a figment of his imagination, a kind of vision.

Technically, the detailed drawing of all the elements is striking. Glitter of stained-glass windows, stucco molding on the column, decoration of heroes, diversity and simultaneous harmony and saturation of colors (look enough at Maria’s dress) – all this creates an elevated composition full of color and trepidation.

The masterpiece van Eika was once stored in the Hermitage, but in 1930, the new government, in an effort to “break holes” in the economy of a newly made country, decided to sell works of art without much bargaining. A real tragedy broke out: priceless paintings went for nothing. The same thing happened with Van Eik’s “Bratification”. Even abroad, this “action” was condemned. One way or another, for Russia the work was lost – now the picture belongs to the Washington National Gallery.