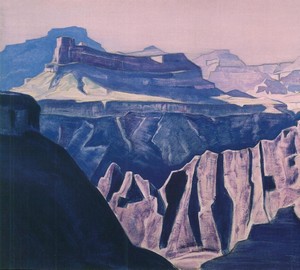 In 1920, Nikolai Rerich leaves for the United States, where he organizes a large exhibition tour in the cities of America. On the American continent, a Russian artist, philosopher, ethnographer created several series of paintings with different characters and contents. Rerich called the work on the Grand Canyon in Arizona “Blue Temples”. Being an inquiring researcher, Rerich could not help but be interested in an amazing place – one of the deepest canyons on earth. Half a century after the creation of the picture, the canyon will be included in the UNESCO World Heritage List.

One of the central philosophical and cultural ideas of Rerich proclaimed the unity of cultures and peoples, and the Grand Canyon combined the traces of as many as 4 geological eras. Here in the picture, the mountains and canyon rocks look like a puffy. But the stepped peaks of the rocks, Rerich presented in the form of monumental structures, temples. This fantasy of a painter organically fit into both the concept of his philosophical ideas and the geographical picture of the area. Like some sacred structures, the peaks of the rocks of the deepest canyon serve as a symbol of unity. After all, beauty is understandable to everyone, and beauty created by nature in the complex and long process of evolution belongs not to one country or religion, to the people or to historical time – it belongs to the whole world, to humanity.

In a dominant color in this work, Rerich appointed blue. Here you can see, it seems, all its shades: from dark ultramarine to gentle azure. Rerich was very fond of working with a blue flavor – the master brilliantly wrote the sky, and thanks to his talent, the heavens literally lived their lives, delighting with outlandish figures and outlines. In the same work, the sky of Rerich leaves virtually neutral, focusing on the natural architecture of the canyon, monumental, mighty.

Rerich deliberately uses the tempera, knowing that even after years saturated, blue will not lose its brightness and saturation, like oil-based paint. The artist boldly operates with color masses, clotting them in shape with simple, understandable lines.

For his relatively short stay in America, Rerich managed to do a lot – to establish several cultural centers, art associations in large cities, to open the Center for Art in New York. His turbulent artistic and social activities, numerous cultural lectures resulted in well-deserved admiration and recognition in the West, and in 1923 the first museum in the world appeared in America, dedicated only to one artist, namely the Nikolai Rerich Museum. The talented artist, an outstanding personality, a subtle thinker here was seen much earlier than in his homeland.