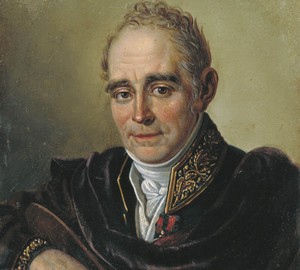 The future painter was born in 1757 in Poltava, in the Cossack, but very creative family – his father and two brothers had painted icons in the churches, and what subsequently took up Vladimir, having served in 1774 in Mirgorod Cossack regiment.

A sign can be called the order received Borovikovsky in 1787, the painting of the interior of the house of the famous Russian poet and playwright Vasily Kapnist. The order entered in connection with the upcoming arrival of Catherine II, traveling to the Crimea. The artist executed two murals with images of the Empress and of Peter I, on allegorical themes. Both paintings are so attracted to Catherine that she advised him to move to Saint Petersburg to study.

Do not miss the opportunity, already in 1788 Borovikovsky goes to the capital. Age limit (he was by that time 31 years old), did not allow him to enter the Imperial Academy of arts.

But he was living in the house of architects, graphics and poet N. A. Lvov, met with prominent representatives of the Russian Enlightenment of the time: the poet and statesman G. R. Derzhavin, with academician of the Academy of arts D. G. Levitsky, takes painting lessons at the Austrian graphic artist and painter at the court of Catherine – Lampi Johann Baptist.

By the middle of 1790-ies – Borovikovsky one of the most popular and sought after portraitists.

Not being trained in the Academy, Vladimir gets in 1794 the title of “appointed” in academics. In the same year, he wrote a portrait of Catherine II, generating interest for its unusual vision of the Empress.

In 1795, with the portrait of the Grand Prince, the Russian crown Prince Konstantin Pavlovich, he is awarded the title of academician of painting.

In 1798, went to Austria Lampi, left Borovikovsky his Studio in which the artist lived the rest of my life.

Comes the blossoming of his creativity. Famous portraits of the state and influential people: G. A. Derzhavina, diplomat A. B. Kurakin, Minister of D. P. Troshchinsky, Metropolitan Mikhail Desnitsky, Iranian Prince Murtaza-Kuli-Khan and many others.

Borovitsky honed and at the same time light writing technique, creating a feeling that the author is not difficult to create their masterpieces. Perhaps he slightly embellishes the image compared to the original, but it does so gracefully and subtly. And more orders from those wishing that the portrait was written Borovikovsky.

And his magnificent series of portraits of women simply admire its execution. It was during this period sentimentalism in the works of Vladimir lukić finds the most brilliant incarnation. It is expressed in airy, almost weightless letter, lyrical tones on the background of nature, a General feeling of tenderness and naturalness.

Of course, first and foremost, this is a brilliant portrait of M. I. Lopukhina. Also known portraits of the lovely Lisa and Dasha, gentle and simple of O. K. Filippova, unusual beauty of E. A. Naryshkina, alive and young, V. A., Shidlovskaya, Torzhkovskaya peasant of Christine and many others.

They are all approximately the same composition, but in each work, subtle touches, the author emphasizes character, personality, sincerity and sensitivity of each character.

At the beginning of 1800-ies, through acquaintance with D. G. Levitsky, philosopher and writer A. F. Labzina, Vladimir Lukich makes the decision to enter a Masonic Lodge, and then leaving it in 1819 was fascinated by mysticism. But never found a vent in this area has become more introverted, storename communication.

The artist felt that his time out of the past, came new times, new people with other tastes and preferences in art, it’s time for new young talents.

The last years of his life he had not painted portraits, and engaged in teaching. So, aspiring artist Alexei Gavrilovic Venetsianov took his painting lessons.

Borovikovsky leaves a religious theme, painted the walls, he painted icons for the Kazan Cathedral.

His “Annunciation”, “the virgin surrounded by angels”, “the Crucifixion”, “Martyr Ekaterina” and other icons and paintings that remind you that Borovikovsky not only secular painter, portraitist, but also a man of deep faith, whose religious themes are inseparable and goes throughout his life.

It is symbolic that the last work of the painter was the iconostasis of the Smolensk Orthodox cemetery in St. Petersburg, where in April of 1825 and was buried Borovikovsky.

Family life of Vladimir lukić did not work, he had had no wife, no kids. Under the will, the possessions and he said to give everyone who needs it.

Descendants of Borovikovsky not forgotten, his work in our time attract the attention of your purity, sincerity, sentimentality – qualities that sometimes lack in the modern world.