Borovikovsky, portrait of F. AND. Borovsky – overview of the painting 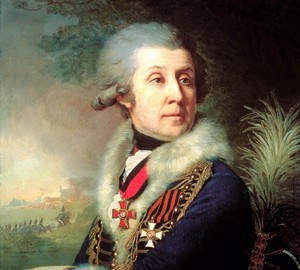 Vladimir Lukich Borovikovsky wrote a number of portraits of statesmen, emperors, influential people and, of course, the military, which at that difficult time were many.

Male portraits of Borovikovsky, unlike gentle and sentimental women, show the significance, status and position of a person in society.

A portrait of the fighting major general of Borovsky Fedor Artemyevich, written in 1799, is known.

Fedor Artemyevich is a Russian military leader who has served in the cavalry for young years. He is a comrade-in-arms and associate of Russian commanders Alexander Vasilievich Suvorov and Mikhail Illarionovich Kutuzov.

For the years of service, the Borovsky participant of the Russian-Polish war was awarded the orders of the Holy Vladimir of the 3rd degree and George of the 4th degree, since 1796 he was the commander of the Hussar Regiment, since 1798 he has been retired, and by personal decree of Paul I he was given permission to wear uniform.

It was in the hussar, beautiful and ceremonial uniform, shaded by fur, that the artist depicted the military general.

The fact that we have a brave, valiant and high-ranking warrior is evidenced by his awards, as well as the golden efes sabers and a hat with high plumage depicted to the left of Borovsky.

As always, the artist perfectly conveyed the texture of materials – fabric, fur, bachroma.

The background of the portrait is a battle scene designed to perpetuate the heroic feats and military merits of Fedor Artemyevich in the memory of the descendants for the glory of Russian weapons.

Borovsky’s pose, based on the cane, is full of dignity and dynamics at the same time, due to the fact that the author portrays him in a half-turn.

With such a statement of nature, Borovikovsky once again emphasizes that we have a brave, courageous, energetic hero, fanned by the romance and glory of military campaigns.