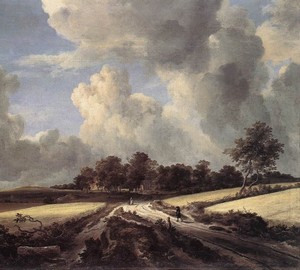 Bread Field – Jacob van Roysdal. Around 1670. Oil on canvas. 100×130.2
Jacob van Ruysdal, an outstanding Dutch landscape master, captured the amazing image of his native land on the canvas. The leveled expanses, displayed as a living creature, appear to be animated by the all-subordinate power of nature.

The composition of the picture is built on a central perspective, supported by a road in the foreground, dividing the composition into two parts. With her slightly winding movement, she draws the viewer’s eyes to buildings, looking through trees against the background. A low horizon allows the cloud sky, which occupies two-thirds of the canvas, to turn into its entire breadth. In some places, the sun’s rays manage to break through the clouds, pouring gold through the fields, reflecting different shades in the light and shadow.

Three lonely figures, distinguishable on the road – a woman with a child and a traveler walking towards them – seem lost in the majestic picture of nature, as if demonstrating that life is not subject to human, but to higher laws. Dry branches and tree trunks in the foreground, apparently, reflect the concept of vanitas (“plot”) – the brandy of earthly existence. The state of rest, which dominates the composition, is violated by a slight trepidation and a barely noticeable melancholy anxiety, reflecting the romantic drama of the artist’s temperament.