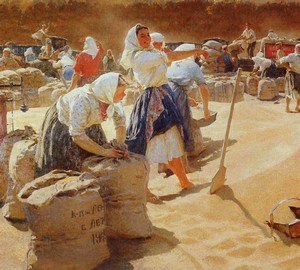 This is one of the well-known paintings by Soviet and Ukrainian artist Tatyana Yablonskaya. It was created in the post-war years, when the Soviet Union heroically coped with the devastating consequences of World War II. The canvas brought the artist the Stalin Prize and caused a storm of various emotions. At the end of her life, Yablonskaya herself called the canvas “cry” because of his social orientation, but she was a tough and self-critical person, so these words can be considered a purely subjective assessment of a constantly dissatisfied master.

Before exhibiting this picture, the artist received sharp criticism of her previous works, which were condemned for using the ideas of impressionism. Any references to the “bourgeois culture” in the USSR were suppressed and condemned. Tatyana Nilovna herself considered the charge true and decided to write a more realistic canvas with an acute social orientation. He became “Bread”, but the artist’s nature was such that she physically could not follow party dogmas, continuing to “see as an artist” rather than fulfill a state order.

The picture shows the moment when village women collect ground and tested grain in bags on the threshing floor. In the background is a huge skird, blocking the horizon and creating a sense of chamberiness on the canvas. It serves as the background to everything that happens on different plans.

Strong, tanned and rosy women are clean and smartly dressed. The artist later admitted that she specially “dressed” her characters in more festive clothes in order to betray a canvas of joy and painting. Later, she was often criticized for “nationalist” inclinations due to the fact that Ukrainian folk motives clearly look through the outfits in the outfits, although at first glance this will not be said.

All canvas is designed in golden warm range. This is supported not only by the color of the grain, but also by the stream of golden sunlight, which literally fills the entire canvas.

The composition here is very dynamic. The figures and elements in the background form a semicircle, highlighting the three main figures in the foreground. This is a woman tying a bag of grain, a smiling peasant woman, in front of whom there is a special shovel for grain and a woman who has turned away from the audience, pouring grain into a bag.

The general mood of the picture is a joyful work that brings pleasure and gives people happiness.