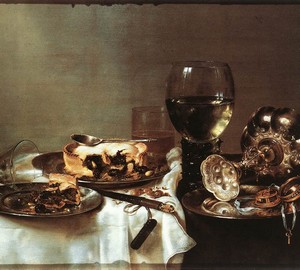 Blueberry Pie Breakfast – Willem Clas Head. 1631. Wood, butter. 54×82
In the XVII century in Holland, many artists created still lifes, and in their midst there was specialization: one depicted flowers, the other – dishes, the third – musical instruments. Willem Clas Heda (1593 / 1594-1680 / 1682) wrote the same type of still lifes for several decades, at least they date both 1631 (represented by “Breakfast with Blueberry Pie”) and 1651. For such a long time in one genre, artists have achieved impressive excellence in the technology of transferring fruits, vegetables, fabric textures, metal and glass objects, and water in glasses. Still lifes with food were called “onbijtjes” (from the Dutch – “breakfast”).

The demand for such still lifes was very large. In the early 1630s, Heda began to write them using the rather conservative canons of his contemporaries – Floris Kles van Dyck and Nikolaes Gillis. It also has a table strictly parallel to the plane of the picture, that is, the back wall of the room. Nevertheless, the artist introduced a certain revival into the composition of his still lifes. So, the white tablecloth does not close the whole table, but only the part. Thus, he avoids the monotonous background.

Hed’s many years of addiction to the same subjects is noteworthy. Cup, glass, glass, Damascus blade, pocket watch with an open lid and an amazingly precisely written mechanism (the painter used the finest brushes in his work) – all this is reproduced with undeniable love.