“Bridge of Fame”, Nikolai Konstantinovich Rerich – overview of the painting 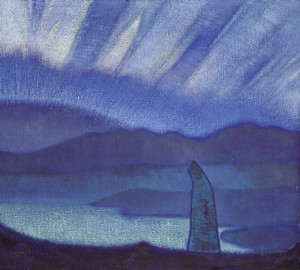 The picture belongs to the Karelian period of the artist’s work when he traveled to the north of Russia and other countries. One of the wonders of nature is captured on the canvas – the northern lights, illuminating the horizon with a long, northern night with bright flashes. But in this picture, this wonderful phenomenon is shown not only as a manifestation of the power of nature. It has a metaphorical meaning – it is a symbol of spiritual purification and enlightenment.

This thought is pushed by a small chapel depicted in one of the corners of the picture, half-hidden by mighty northern pine trees. Such chapels were built in Orthodox monasteries and skits, of which there were a lot in the Russian north. Believers deliberately chose these harsh places to serve God, since nothing in them distracted from spiritual purification and transformation.

The picture is made in cool blue and blue tones, which further emphasizes its northern “origin”. Despite the almost monochrome palette, the image does not seem monotonous or boring at all. If you look closely, you can notice small inclusions of greenish and yellowish tones in the northern lights, as well as grains of raspberry and pink on the slope where the chapel is located. All this gives the canvas a volume and emphasizes the attractiveness of the cool blue-blue gamut chosen by the artist.

Cold paints seem to be poured over the canvas, creating a volumetric effect of presence and an amazing sense of ownership. This canvas makes you think, immerse yourself, feel unity with millions of departed ancestors.

Opposite the chapel, a silhouette is visible, resembling an Orthodox black monk in a hood and a long cloak. It does not have recognizable individual and distinctive features, it is a collective image of all monasticism, atone for the sins of mankind with its ascetic life. There is evidence that the writer Vsevolod Ivanov knew that in the image of a monk, Rerich portrayed the most revered saint in the Orthodox religion – Sergius Radonezhsky. He is considered an intercessor, defender of Russia, spiritual mentor and teacher.

The figure of a monk is located on the very crest of a dark slope. Behind him extends a huge bay of the cold sea, with cut banks and deep bays. In the background are low hills of distant islands. And over all this peace reigns the sparkling and iridescent splendor of the northern lights.