Bringing to the temple, Ambrojo Lorenzetti, 1342 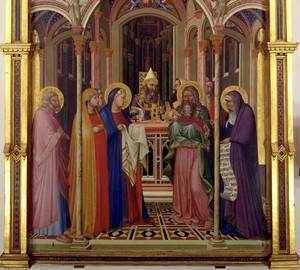 Bringing to the temple is Ambrojo Lorenzetti. 1342, wood, tempera. 257×168
The master from Siena Ambrojo Lorenzetti (about 1290-1348) created this altar, from which only the central part reached us, for the Siena Cathedral.

The Gothic interior of the church – the action of Lorenzetti takes place in the cathedral, for which the altar was intended – is combined with “antique” sculptures on the facade, for example, with winged geniuses supporting the garland. The triumph of the scene is emphasized by the bright, sound colors of the clothes and architectural elements, and with this high fret they surprisingly harmonize the detailed details – the clothes of the high priest, the sacrificial pigeons in his hand, the capitals of the columns decorating the mosaic church.

Elder Simeon holds the Baby Christ in his arms and trembles with trepidation prophesies of Him, Mary, hearing his words, is sad and immersed in herself. All other characters who listen to the elder are also endowed with their emotions. This desire to express the feelings of the depicted, to write their figures quite volumetricly was an undeniable sign of the approaching Renaissance.