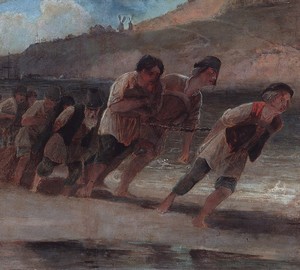 The painting was written in 1871, at a time when Savrasov began to travel especially often to the Volga, trying to gain inspiration for work and gain new motives for his works. The artist visited the Volga region from the beginning of the 1870s to 1875. Most of all, Savras loved the Volga banks between Yaroslavl and Kostroma.

For most people interested in painting, the name “Burlaki on the Volga” is associated with the work of Repin of the same name. It is believed that the image of the Volga burlaks was discovered by him. This is a fallacy: the idea of painting their life appeared at the turn of the 1860-1870s at Savrasov, who was already an experienced master by that time, and Repin, who had just begun his artistic career, was completely independent. This coincidence is significant, because then the artists have not even heard anything about each other.

The painting “Burlaki on the Volga” is inspired by dreary thoughts. Exhausted faces of the drillers, tense and harnessed bodies, heavy gait. Shouting poverty and need.

But no matter what, the drillers are not crushed or clogged. They continue to live, making their way through the difficult life trials that have befallen them. They do not give up – and this is their strength.

The folk mood of the pre-reform era was conveyed in the work: the peasants freed themselves from serfdom and waited for their will. They did not receive it. Having gathered the remnants of power, fasting their teeth, they decided to endure the transition period following the reform, to be patient for the last time. But now certainly in the last.

The talent of a realist artist is to correctly catch spilled in the air. The fact that two great Russian artists in the same historical period felt the need to describe the same thing is not surprising: this only confirms their true talent, if not genius.