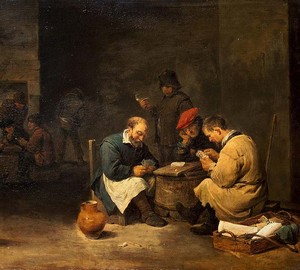 Cartesians – David Tenirs the Younger. 1640s. Oil on canvas. 39×54
The plot and composition of the ermitage canvas dates back to the works of Adrian Braver, who often addressed a similar topic. However, Tenirs interprets this plot in his own way, preserving the grotesque interpretation of faces only for background figures (scene with smokers on the left) and individualizing the main characters. In the picture of Tenirs, the card game, which is occupied by his heroes, personifies the waste of time. The artist connects this topic with the allegory “Vanitas” (“Suteta vanity”).

The canvas “Carthetics” should be attributed to the mid-1640s, based on the characteristic creativity of the master of light golden tone in the color, as well as on the stylistic proximity to the painting “Chicker” dated by the artist.