Catherine II for a walk in Tsarskoye Selkoye Park, Borovikovsky – overview, analysis of the picture 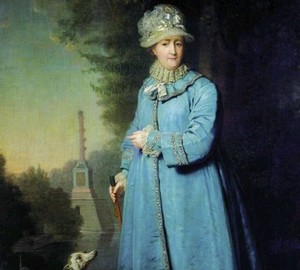 Vladimir Lukich Borovikovsky is an outstanding master of the second half of the XVIII – the first quarter of the XIX century. A distinctive feature of his portrait creativity is the image of models against the background during childbirth, thereby pointing to the harmony of man and nature, his naturalness and sincerity. It is a characteristic sign of a new style of the era – sentimentalism.

The portrait captured by Borovikovsky on the slope of Catherine II is an exceptional example of the image of the monarchs. It is difficult to find out in an elderly friendly lady walking along a park path, a powerful empress. Her clothes are emphasized unofficial, and there are no attributes of power familiar to the ceremonial portrait. The ruler is not depicted in the palace interior, traditional for portraits of kings of that time, but among the dense greenery of Tsarskoye Selkoye Park. But at the same time, the model is full of dignity, its posture and gestures are still majestic, and the surrounding nature is designed to emphasize primarily the human beginning of the autocracy of the Russian throne.

In the era of the reign of Catherine the Great, a whole gallery of her portraits was written by various artists who served to create the right image of an enlightened, wise, kind, great-power empress.

The artist moved away from the parade and solemnity of the image. The portrait turned out to be chamber, almost home, quite in the traditions of sentimentalism.

In the performance of Borovikovsky, she is not a sovereign and an autocrat, but an ordinary, earthly one. And around not the golden halls of the palace, but a calm landscape, quiet alleys of the garden, a pond with swans.

A middle-aged woman is looking at us (although at that time Catherine is 65 years old and her years embellished by the author), she relies on a cane, at the feet of her beloved dog.

Catherine here is very human, with a good smile and a calm face, but at the same time, the inner strength and dignity of the empress is felt.

Her left hand points to the Cesmen column depicted in the distance, which in this canvas is a symbol of the country’s power and victory in the Russian-Turkish war. Such an allegory, the artist emphasizes that, opening his personal sides of character, nevertheless, before us is the monarch of the victorious Russian state.

A copy of this canvas is known, which Borovikovsky himself wrote in the 1800s. Catherine is depicted against the backdrop of the Kagul Obelisk, established in honor of the victory over Turkish troops in the Kagul battle of 1770. But, perhaps, this portrait turned out to be more strict and dry in the author, and even in the person of Catherine there is less roundness, blushness and kindness.

Also, on this copy, the engraving of Nikolai Ivanovich Utkin “Ekaterina II”, performed in 1827, is known.

And a copy and engraving was ordered by the son of the Russian Field Marshal Peter Alexandrovich Rumyantsev-Zadunaysky in order to perpetuate the memory of his father, his victories in the war with the Turks.

The portrait of Borovikovsky state was not liked. He was acquired by the landowner of Muromtsev, then the philanthropist Kharitonenko, and subsequently he entered the Tretyakov Gallery.

Maybe the portrait and would not have such fame and did not cause so much interest if not for A. WITH. Pushkin. His “Captain Daughter” returned the picture with a second wind.

Reread Chapter 14 and with the eyes of her heroine Marya Ivanovna you will see in the park that very woman on the bench, opposite the monument, in a shower, important and calm, with blue eyes – Empress Catherine II .