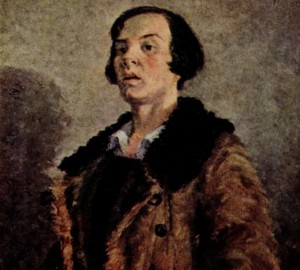 The chairman is Georgy Georgievich Ryazhsky. 1928. Oil on canvas. 109×73
Soviet artists of the 1920s sought to notice the new that the post-revolutionary era gave birth to in everyday life, in the minds of people, in their appearance and life. Georgy Georgievich Ryazhsky created a number of portraits-types: Rabfakovka, Printer, Delegatka, Vuzovka, Chair. Ryazhsky women are the new type of people who were formed by the revolutionary era. Ordinary and modest workers have become equal members of society. Shortly sheared, broad-faced, the heroines of Ryazky are full of internal energy. They are able to rule the state, lead the masses.

One of the best works of the cycle is “Chairman”. The artist depicts a woman at the time of the performance. Ryazhsky reveals in her appearance the features that make it possible to feel the atmosphere of the social life of those years: simplicity and severity of life and at the same time – a hot enthusiasm for the idea, a great emotional upsurge. The artist marks the woman’s condemned face, the modesty of her hairstyles, clothes. A warm little fur coat is also not an accidental detail. You can easily imagine the cold, unpopular room where the meeting took place. The audience is captivated by the enthusiasm with which the chairman speaks, the conviction and economic confidence that are felt in her manner of holding on.

The vertical of the canvas emphasizes the significance of the figure. With wide energetic blows of the brush, the artist sculpts forms tightly. The color scheme of the picture is restrained, but beautiful in its own way. By the whole nature of the work of this work, Ryazhsky affirms the type of person born of the Soviet era – the active builder of a new life.