Charles I, King of England, on the hunt, Antonis van Dyck 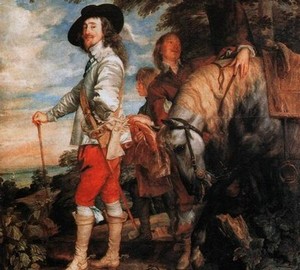 Charles I, King of England, on the hunt – Antonis van Dyck. Oil on canvas. 266 x 207 cm
Flemish portrait painter and religious artist Antonis van Dyck (1599-1641) since the beginning of the 1630s lived in London, being the court artist of King Charles I .

On the front portrait, the king is captured by the one standing, leaning on the cane, on the edge of the cliff. Everything on the canvas is subordinate to the king’s statue. It clearly stands out against the background of the vast bright sky. A black broadband hat gives expressiveness to the image of a hero and, contrasting, attracts the viewer’s eyes to his face, which looks very spectacular.

The portrait was purchased by Louis XIV and entered the Louvre in 1775.