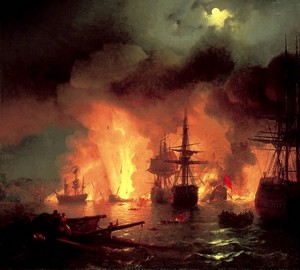 A recognized master marinist, an artist like no other knew how to portray the sea in any of its conditions and various ships – from a small boat to a huge sailboat. The picture depicts the moment of the naval battle of the Russian fleet against the Turkish, in which the latter suffered a crushing defeat and lost many ships and his experienced sailors.

The canvas reflects the decisive moment of the night battle, when the Turkish fleet was completely defeated. This monstrous and frightening sight – huge ships burn and drown like chips, and surviving sailors hardly cling to the remnants of masts and rigging. The incredible power and horror of this battle is emphasized by the highly sighing pillars of the flame, so it seems that the sea itself is blazing with a hell of a flame. Flash of fire are so masterfully written that a feeling of a magnificent heat of the picture is created.

The depth of perspective and volume of the picture is given by the use of contrasting colors. The general color scheme is very dark and gloomy, which not only corresponds to the tragedy of the event, but is also determined by the fact that the battle took place at night, and the smoke and crap from ships dying in the fire literally closed the horizon. The sky as such on the canvas is not visible, it is tightened with a dense curtain of black mourning smoke, against which fire bursts of colors of burning ships and a yellow moon, barely visible under the cover of smoke clubs, clearly stand out.

In the foreground of the picture is a crowded boat crowded with people who have just blown up one of the Turkish ships with their hose. From this explosion, a grand fire occurred, which soon destroyed almost the entire linear Turkish fleet. On the other hand, a handful of Turks surviving in the battle are trying to save the canvases on the remnants of their sunken ship. All their hope of survival lies in the fact that they will be captured, not allowing them to drown in the gloomy waters of the Aegean Sea.

This historic battle allowed Russian troops not only to prevent the Turks from freely moving their ships in this area of the Aegean Sea, but also to establish the blockade of Dardanell, which prevented the main forces of the Turkish fleet from entering the Black Sea.

Using such a limited color scheme, the artist managed not only to convey the realities of the sea battle, but also to do it so masterfully that the picture looks like a real photo story from the place of a historical event, striking the imagination of the modern audience with the grandeur and danger of sea battles of past eras.