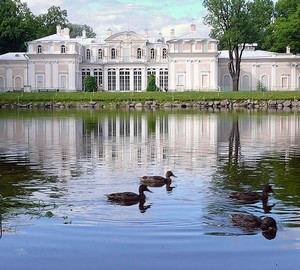 The Chinese Palace was built in 1762 — 1768 years on the project and under the leadership of the major architect of that time, Antonio Rinaldi (1709 — 1794), whose name is associated critical period in the creation of the architectural ensemble of Oranienbaum. Arriving from Italy at the invitation of K. G. Razumovsky (1751), Rinaldi has lived in Russia for many years, having found here a second home.

Chinese Palace along with other valuable architectural monuments of the time belongs to the masterpieces of Russian art. Title, securing him in the nineteenth century, relatively. The appearance of the building has nothing to do with the architecture of China. Only in the decoration of some rooms of Chinese applied freely interpreted decorative motifs. In the Palace there was a large collection of works of Chinese decorative art and Japanese porcelain. Part of the Assembly is preserved.

The Palace is a relatively small elongated building, somewhat reminiscent of a summer Park pavilion. It surrounds a low bar made of stone slabs and decorative cast-iron fence. Two small parterre garden, the broken front of the southern facade, are included in the overall composition of the building according to the plan of the architect are an integral part of it. A similar role is played by huge spreading oak trees, especially when planted near the Foundation of the building: they seem to associate it with a vast shady Park. The middle part of the Palace is somewhat overstated and serves as its compositional centre. Facades treated with pilasters, calm rhythm which emphasizes the smooth planes of the walls. Windows and glazed doors decorated with stucco surrounds.

The original Chinese Palace was one storey. Only in the middle, high part of its South facade upstairs was one or two rooms had artistic decoration. The superstructure of the second floor above the corbels (projections) of the southern façade is made, apparently, by Andrei Stakenschneider (1802 — 1865) at the end of the 1840-ies. By him in 1850 — 1851 years to the Eastern part of the building was made an extension with one room (the so-called Large antechamber), adjoining the hall of the Muses. In 1852 — 1853, the architect L. bonshtedt (1822 — 1885) made a similar extension (Small antechamber) to the West side of the building — the Large Chinese Cabinet, and reconstructed the Central, enclosed between the projections is part of the southern facade, arranging here a glazed gallery with a balcony above it.

The appearance of the building, the combination of its size, proportions and ratios of the individual parts reveal the location of the interior. The difference in the purpose of the latter is emphasized by the peculiarities of architectural design and finish of the relevant sections of the facade. Plan of the Palace is symmetry and compositional balance. It is characterized enfilade system — the location connected interiors on one axis: the Center of symmetry is a Large hall with a height of 8.5 meters. Such Central ceremonial halls, often called “Italian”, playing the role of an important organizing element in the layout of the Palace buildings. On the sides of the hall, along the main axis of the Palace, located living rooms (Blue and Purple) and offices (Small Glass beads and Chinese) included in the enfilade of gala rooms. The Suite ends with the Eastern and Western sides of the Muse Hall and the Grand Chinese room. The Great hall adjoins the Front, through which in the XVIII century was the main entrance. Next to it is the Dressing room. Through the Blue room and a Small Chinese Cabinet front Suite connects directly to a running perpendicular to her small Suite of the former “personal” rooms of Catherine II and her son Paul.

The Chinese Palace was built in the period of transition in the history of Russian architecture-the architectural-decorative techniques that have received a bright development in the 40 — 50-ies of the XVIII century, has ceased to satisfy new feature requirements, and replaced them shortly different style — classicism — have not yet managed to find in the architecture of your finished expression. Features of this transitional period are particularly evident in the appearance of the facades of the Palace, which is characteristic of earlier buildings accented by decorative and ceremonial splendour give way to the relative simplicity and brevity of the artistic decoration that was typical of the emerging classicism.

In the construction and decoration of the Chinese Palace was attended by many talented artists: marblers, modelers, the mosaicists, parquet, wood carvers, gold and others. Two major Italian painter Stefano Torelli (1712 — 1784) and Serafino of Barozzi (mind. in 1810) — worked on the decoration of the Palace with paintings and murals. Elaborate architectural and decorative problems found here a clever decision due to the high professional skill and great artistic culture of the builders and decorators.

The unique artistic value of the Palace floors with a total area of 722 square meters. collected from many domestic and overseas wood species, including red, pink, black and lemon tree, rosewood, amaranth, boxwood, Persian walnut, oak and other (in some areas they can count to fifteen). Wooden plates were glued in the form of different patterns on the shields. Small patterns are then carved or burned up. For each room gained its original parquet pattern closely aligned with the rest of her decorations. The floors are of exceptional value. In concept and execution, they have no equal in our country.

The organic part of the architectural decoration of the interiors of the Chinese Palace is decorative painting. Wall paintings, murals, lampshades occupy an important place in its finish. It is difficult to overestimate the value of these unique paintings. Located here is a collection of shades has a high mastery of such a meeting has neither a surviving Russian palaces.

For the decoration of rooms and halls of the Palace have acquired first-class works of fine and applied arts. Most of the shades written on canvas, executed in Venice by special order by a group of renowned painters of the Venetian Academy of arts. In the Palace were collected a valuable collection of Russian and Western European porcelain, furniture and Chinese and Japanese artworks of the XVIII — XIX centuries.

The interiors were designed by Rinaldi, in its artistic appearance is closely related to architecture 1730 — 1750-ies. Deviation from the dominant up to that time decorative techniques manifested in them with much less certainty than in the facades. The work of the architect, the marked features of the transition period in the development of Russian architecture of the XVIII century, has not marked a decisive break with artistic techniques of the masters of the Baroque. But in spite of this, its buildings etched the characteristic features of individuality.

After the great October socialist revolution, the Chinese Palace was turned into a Museum and opened to the public. Were possible science-based restoration and proper preservation of its artistic wealth. In 1925 — 1933 years conducted large work on the restoration of decorative painting, including a range of shades. This event was very important to preserve the valuable paintings.

At the beginning of the great Patriotic war, after the evacuation of the Museum collections, the building was preserved, and during the whole period of the siege it was under observation. The damage caused to the Palace in the shelling and bombing of the enemy, was relatively small, and immediately after the war, in the Palace, restoration work began. In 1946 — 1949, was restored and installed valuable ceiling lamps and other paintings of Italian artists. Restored stucco, and gilding. Most of the rooms were made of high-quality painting of walls and ceilings, strengthened artistic set of parquet flooring, restored furniture items of furniture and porcelain. All of these activities was conducted at an accelerated pace. Created a new Museum exhibition. Part of the premises of the Palace was restored and opened to the public already in 1946. In 1950 — 1951 restored building facades, pink coloring which now corresponds to the original.

The preservation and restoration of historical-artistic monuments are carried out on scientific and technical methods. Monuments are studied extensively not only to restoration, but also in the process of restoration. While we study the literary and historical data, detailed engineering drawings, and the entire process is recorded through records and photography. Thus, in accordance with the scientific-technical and artistic requirements were restored and the Chinese Palace Museum. The attendance of this architectural and artistic monument, is increasing from year to year. If in the summer season of 1946 the Palace has been visited by 15 610 people, in 1949, the number of visitors grew to 32 700 people, and in 1951 to 49 725 people. In 1953, the Museum was visited 63617 tourists, and in subsequent years — more than 70 thousand annually.