Chocolate house in Kiev – a description of the Museum, Ukraine 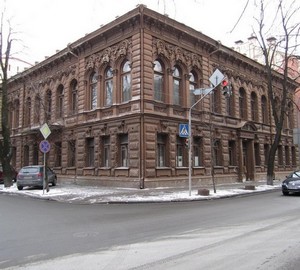 In the most beautiful city of Ukraine – Kiev, the breadbasket of the Ukrainian culture, on the street shelkovichnoe, is a memorial building decorative art, affectionately called the “Chocolate house”. Why chocolate? Yes, interesting question. If you look at the mansion from the side, one can notice a surprising similarity of color and texture of the facade, with chocolate tile. Same color, same texture.

Invented and implemented in reality is a miracle of history Vladimir Nikolaev, who in 1899 was chief architect of Kiev city centre. Well-known philanthropist and merchant of the first Guild at the time, Sergei Mogilevtsev bought a part of the General of the estate and instructed to Nikolaev to build the building. Ordering was difficult, but was “on the shoulder” the young architect.

Extremely talented and extraordinary artist Nikolaev demonstrated on the design of the building and internal decoration all their ideas and thoughts. Yes, it was very experimental and risky, many seemed tasteless. No one at that time even could not imagine that you can compose together modern, Renaissance, Gothic and Baroque. Now the building belongs to the work of art and is the artistic value of the state. 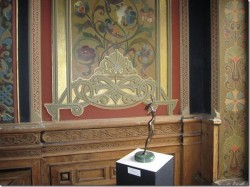 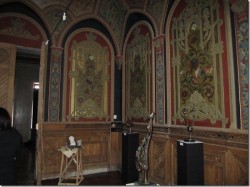 Russian hall
The building area is nine hundred square meters, it is two-storeyed, square in shape. Walking through the halls of the house Museum involuntarily stops look literally every monumental decorations of the walls, columns and ceilings. You can not pass up carved wooden panels, decorated with rich gilded moldings and window sills and Windows with carved patterns. Not to look away from the parquet floor and brightly colored stained glass, not to mention the marble staircases with wrought iron railings. All of this decoration creates a festive atmosphere. 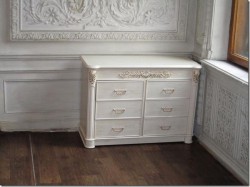 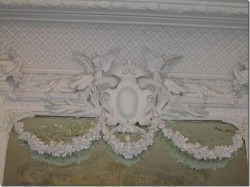 White hall
In the “Chocolate house” a few rooms. The biggest is considered to be the White hall, decorated in the Baroque style, which held the receptions, musical evenings and balls.

Second most important was the Byzantine hall , or in other words, the front dining room, where decorations garlands images of different fruits. 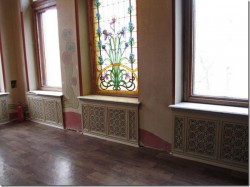 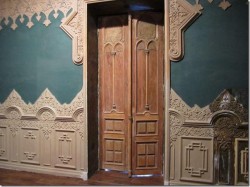 Room in the Moorish style 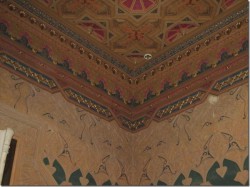 of the Moorish Ceiling of the room
A small Moorish hall is decorated with carved plaster panels, and next to it is a room decorated in the art Nouveau style. The exposition of the classical Empire style marble stairs of the house.

Initially, the facade was painted in different shades: chocolate, coffee, with different intensity of depth and colour to better highlight elements of the facade. It is in our days it is colored in monochrome chocolate color. 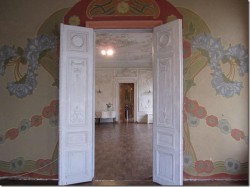 Room in modern style
But unfortunately, the share of the Chocolate house, have a lot of fate. After the revolution it changed owners and functionality. Even the building was transferred to the Department of culture under the wedding Palace. During this time, it was never repaired, and the restoration started only in 1983. Of Finance at that time was not enough, and the repair was carried out parts. During the collapse of the USSR it was closed. And only in 2009 began restoration work on the facade and partially through the halls. The following year, the Chocolate house was opened for visitors.

Now there are three rooms (White, new Russian and art Nouveau) and the former Smoking room. Soon there will open an art gallery and school ethnic children’s education.