“Christ among teachers,” Albrecht Dührer – overview of the painting 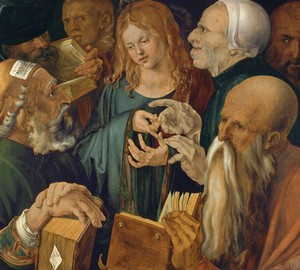 Christ among the teachers is Albrecht Durer. Board, oil. 65 x 80 cm
“Christ among teachers” is a fragment of the life of young Jesus captured by Albrecht Durer. According to the Gospel, once Mary and Joseph went to Jerusalem for the feast of Easter. After the celebration, they did not notice that the young Christ remained in the city. Found him after a day of searching: Jesus Christ was in the temple surrounded by teachers. All the sages were amazed at his speeches.

Albrecht Durer painted the picture in five days, being at that time in Venice. The artist did not make the face or image of Jesus Christ, but his hands the center of the composition. It can be seen that the fingers are bent on the hands – this Dührer showed how Jesus scores his arguments in the conversation between him and the teachers.

The Savior’s face is thoughtful, melancholy, but shining with wisdom.

The second striking detail is the hands of one of the teachers. It is believed that the image of this teacher is taken from the painting by Leonardo da Vinci “Five grotesque heads”, and the gesture in which the hands of the sage are folded is shown nervousness and embarrassment from the brilliant speeches and thoughts of Jesus.

Some art historians also notice that Durera teachers are a theory of four types of human temperament embedded in the picture. Indeed, if you look at their faces and radically different emotions, you can see melancholy, choleric, sanguine and phlegmatic.

It is also believed that Albrecht Durer wrote the work as a gift to his friend Giovanni Bellini, a famous Italian artist.

Dührer on September 23, 1506 in a letter to a friend named his work only as “a picture similar to which I had not previously written.”. It’s true: “Christ is among teachers” is a landmark work in the artist’s work. The biblical plot, the detailed study of the images of teachers, their ambiguous emotions make the picture really worthwhile attention for all those who are interested in the Renaissance.