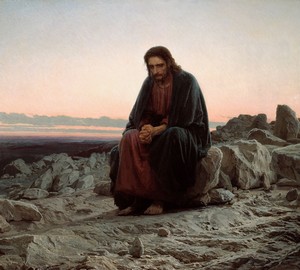 Jesus sits on a stone and is waiting for the sun to rise. The horizon line divides the canvas into two parts: the cold stone desert – on the one hand, and the sky – the world of light and hope, a symbol of future transformation – on the other. Exactly in the middle of the canvas, on the border of these two worlds, the closed hands of Christ are depicted, which together with his face represent the visual and semantic centers of the picture. Here the zone of the greatest “voltage” is concentrated at the time the Savior accepted his fate.

The philosophical beginning in the picture comes to the fore thanks to the compositional decision: the similarity of Christ’s pose on the Kramsky canvas with the pose of F. M. Dostoevsky – “power of the Duma” on the famous portrait of V. G. Perova. Eternal, universal problems, the confrontation between good and evil were central topics in the work of the artist and writer.

The work “Christ in the Desert” made an indelible impression on the public. The Academy of Arts even wanted to award the title of academician to Kram, but the artist, faithful to his principles, had nothing to do with official art, refused.

The painting was also presented at the Second Exhibition of the Partnership of Mobile Art Exhibitions, one of the founders of which was Kram. Many wanted to acquire a canvas, but it eventually got P. Tretyakov for six thousand rubles (the collector did not even bargain with the artist and immediately bought it for the amount named by him). Tretyakov repeatedly said that “Christ in the Desert” is one of his favorite paintings.