Christ in the house of Martha and Mary, Diego Velazquez – overview of the painting 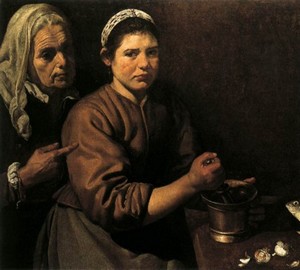 Christ in the house of Martha and Mary is Diego Velazquez. Around 1618

Large figures in the foreground of this canvas, made around 1618., as well as still life on the kitchen table are very characteristic of the style of early Velazquez; typical of the artist and the chosen plot. It is unusual only to shift the emphasis of the picture, namely, the figure of Christ in the chair, who intelligently talks with Maria and another woman who carefully listens to him, in the background. This brightly lit scene, reflected in the mirror hanging on the dark kitchen wall, seems far and similar to a dream, although both women are closely watching it. The index finger of the old woman seems to draw the attention of the viewer to this scene. Martha, a troublesome housewife, is closely following what is happening. The gloomy expression of her face is apparently caused by the whispering of the old woman, awakening her envy of her sister, who, unlike Martha, is not deprived of the opportunity to listen to the sermon of Christ. (Avice was often personified in the form of an ugly old woman.)

MARFA. Martha is the sister of the friends of Christ, Maria Magdalina and Lazarus, an ordinary housewife. The Gospel of Luke describes how she cordially received Christ in her house and slapped her housework, serving him to the table, while Mary listened to his speeches. When Martha rebuked Christ, why he did not send Mary to help her, he replied that Mary had chosen the best path. Martha is always portrayed either at work, or surrounded by kitchen utensils or with a bunch of keys. She, like her sister, served diligently in the gospel of the faith of Christ. Once Martha, Maria and Lazarus set off on a raft without food, but landed safely near Marseille. At that time, the fierce dragon terrorized the inhabitants of Tarazcon, but Martha pacified the beast with the help of holy water and a cross.