“Christ resurrects the daughter of Jairus,” Friedrich Overbek – overview of the painting 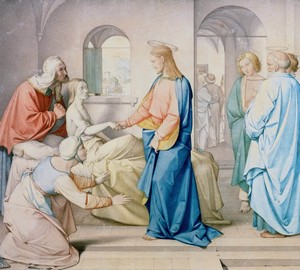 The plot of Jesus’ resurrection of Jairus’ daughter is described in three of the twelve apostles and was often used by famous artists to portray in their religious works.

This miracle in the Gospel says that a certain chief of the synagogue named Jairus addressed Jesus. His only beloved daughter is sick and lies at death. Jairus with the last hope, heard that Christ helps the sick, turns to him for help. And Jesus, along with Peter, John and James, immediately goes to his house. At this time, the news comes that the daughter is dead. Jairus is in despair and sorrow, but he is told: “Believe, and your daughter will be saved.”.

In the picture we see: the girl’s parents hope for a miracle, although, as if not to the end. But the hands of Jairus, closed at the chest, nevertheless confirm that in a second faith will enter his heart, and he will be filled with thankful tears.

The figure of Jairus’s wife is depicted by the author of complete trust, gratitude and tenderness, reverence and worship of the almighty Lord. On the right are the companions of Jesus – apostles worthy of the mystery of the power of God. Their faces are full of human compassion for Jairus, but they are calm and confident in the power of their teacher, Christ, unlike the departing figures depicted in the far arch. Most likely, these are mourners and flashers who come to mourn the deceased, as well as unbelieving people who laughed at the words of Jesus and did not believe in the miracle that he can accomplish.

When Jesus Christ takes the pale, sick girl by the hand and says to her: “Get up and go, then she comes to life and gets out of her bed.”.

When considering the work of Overbek, you understand why the author’s religious painting was valued by both contemporaries and descendants. The whole picture breathes the faith and spirituality that the author put into it and which he undoubtedly possessed.