“Christian Dirtseum in the circus of Nero”, Heinrich Semiradsky – overview of the painting 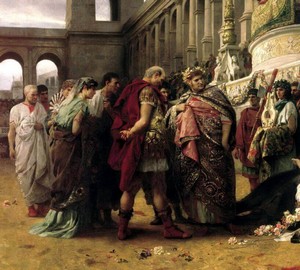 One of the last large-scale paintings by Heinrich Hippolitovich Semiardi was the Christian Dirtsei. The work of Semiradsky always distinguishes not only talented performance, but also interesting topics. This time, the artist is inspired by the events that took place in the 1st century AD, during the reign of Nero (the beginning of persecution of Christians).

What do we see on the canvas? This is a cruel scene of the execution of a Christian woman. The Roman emperor was given such a terrible execution by myths about Queen Dircea, who suffered a similar fate from her stepsons. She was tied to a bull with ropes, hair – to the horns of an animal, accused of greenery and flowers.

Gladiators spear annoyed the bull and drove it around the circus. A exhausted animal and woman die from physical suffering and horror. In the center of the picture, the dead body of the Roman woman stands out on a bleeding lifeless animal.

In the upper right part of the canvas are curious viewers. Below are slaves or workers who have to remove the unfortunate. Even they, who saw a lot of blood and deaths in this circus, have sympathy for this white girl with golden hair on their faces.

Emperor Nero was apparently lowered from the upper stands in a golden throne. With his associates, he comes up and looks with interest and pleasure at this unexpected in reality, and once mythological plot.

Semiardsky puts up work first in Venice, and then in St. Petersburg. An artist who is already accustomed to the attacks of critics receives a portion of “stone” in his address from both mobile workers and academics. But the picture is a huge success with the public. Before her there are constantly crowds of people who enthusiastically contemplate and discuss painting technique, a fascinating plot, small details in the image of architecture and marble, clothes and accessories. The viewer, as always, is on the side of a talented author.