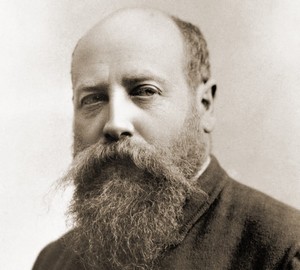 Krogh, Christian – painter and writer from Norway, the most famous representative of the direction of “realism”. He was born in 1852 into a family of famous lawyer. According to family tradition, the future artist studied law in parallel receiving art education in the school of he is known for the Royal school of drawing.

In those years Germany was considered an advanced country in the field of contribution to the art, it is not surprising that Christian decided to go there to continue learning. He studied in Berlin and Karlsruhe. Then in 1879 he visited Denmark, Skagen, where the group of artists-immigrants from the Scandinavian Peninsula. This artistic environment has had a significant impact on the work of Krogh, which he later came to Skagen.

Two years later, the artist was already in France, where he was influenced by the portrait art of Edouard Manet and bastien-Lepage. Also on the artist’s work has affected the largest at that time, the writers of the realism of France, Emile Zola and guy de Maupassant.

Two years later, Krogh returned home. In the capital, he began teaching at the State Academy of arts and crafts. Interestingly, among the students that he taught during that period were Edvard Munch, who later became one of the most famous painters in Norway.

In the following years changed the personal life of the artist. He strikes up a relationship with an artist named ODA Larsson, who bore him a daughter before marriage. A girl named Nana, presumably in honor of the heroine of Emile Zola. Her parents married in 1888.

From 1902 to 1909 the artist lived in Paris and worked as a teacher at the Academy colarossi. In 1907 he was elected head of the Union of Norwegian artists, and at the end of teaching in France, he began working at the Academy of fine arts in the capital of Norway, in Oslo. He served as a Director and teacher.

The main direction of the artist’s work is considered realism, but in the early years it has experienced a strong influence of impressionism and later expressionism. It was beneficial because it enriched the picturesque style Krogh and gave it individual features, the awareness.

In his heritage remained many genre works devoted to the life of ordinary people and the lower classes of the population. He liked to depict everyday life of the local fishermen and sailors, and the most famous and important painting in his work is the painting “Struggle for existence”. It depicts the time of distribution of bread to the poor.

In addition to a successful career as a painter, Christian proved to be a talented and imaginative writer. He wrote articles for Newspapers, and then created a novel that caused a strong resonance. For him, writer and painter was hit by a wave of mass negativity and stigma. Caused by all this was the fact that he wrote the story of a model who was forced to go to the bar in order not to die of hunger. Created in the same period, the picture on the subject of the novel has exacerbated criticism and indignation at the artist of the conservative part of the population.