Church Of The Deposition Of The Robe, Moscow, Russia 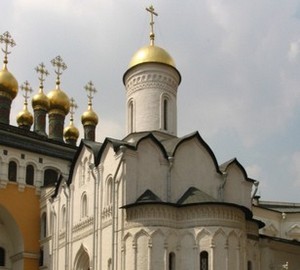 The formation of this Museum of the Moscow Kremlin was the longest, although the monument itself is small. The opening of the Museum in 1965 was preceded by many years of research and restoration. First there was a major work on architectural restoration. In the last period more attention was paid to the disclosure of the scenic resources of the monument. The complexity and duration of these works is mainly due to the fact that this building over its long life has significantly lost its original appearance. It suffered in a fire, destroyed over time. As evidenced ancient document, “through the vaults comes Techa”, “porch stone odelo and fell”, “letter wall dilapidated and crumbling in places”. Especially a lot of distortion in the architecture of the building has made alterations in the XVII—XIX centuries.

Meanwhile this is one of the best buildings of the Cathedral square, the jewel of the monumental ensemble of the Kremlin; it is brilliantly executed miniature, and the opportunity to see and study the monument was due to the fact that the Church of the deposition of the robe is one of the great restoration discoveries of our time.

The construction of the monument refers to the 1484— 1485 years. Its architects — the nameless Pskov masters who were invited by Ivan III to the capital and took part in large construction works. The Church was built in the North-Western corner of the square, the assumption Cathedral, in the court of the Metropolitan. It replaced the previous, injured from the fire, the Metropolitan Church, built in 1451.

Along with this, here in the temple, though the house, but the official belonging to the Palace of the Supreme Church hierarchs, the pillars in solemn poses depict the chosen historical person, including the Metropolitan of Moscow. On the southern pillar represented the princely figures. Is Vladimir Svyatoslavich of Kiev and his sons Boris and Gleb, Vladimir Prince Andrey Bogolubsky and Georgi Vsevolodovich, Alexander Nevsky, Daniil of Moscow.

“Portrait” cycle completes, the son of Ivan the terrible — Tsarevich Dmitry of Uglich. In this gallery of the persons expressed the idea of the continuity of power of the Moscow sovereigns from the ancient rulers of Kiev and Vladimir. Moscow is shown the successor of the initial Russian cities. However, to include in the painting along with the “portraits” of the princes of the image of the Moscow Metropolitan, sought to show that the Supreme power in the Russian centralized state based on the Alliance with the highest authority of the Church.

The Museum “the Church of the deposition of the robe” is another difference. In a small gallery in the building adjoining the North and West, exhibited the works of old Russian wooden sculpture and small plastics. It basically works by Moscow carvers in the vast majority of them belong to the XVII century.

Presented in the Museum of monuments varied, and they differ in style and quality. Working capital masters, for example, grave of the images of Moscow metropolitans, side by side with the products of the provincial carvers.

“Church of the deposition of the robe” — the Museum is small, but great content. Similar and dissimilar to other similar museums. It is quite distinctive, in its introduces the visitor to the wealth of the old Russian artistic culture.