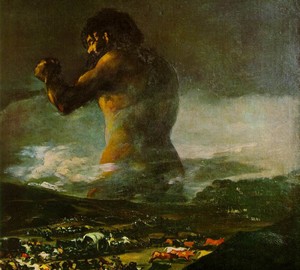 In the canvas “Colossus” Goya (1746-1828) created an allegory for the war with France that began in 1808. Society was scared by bloodshed. In the center of the composition is a huge figure, fiercely clenched fists. This giant crumbling all in its path personifies the cruelty of war, which brings ruin and death. The appearance of the Colossus walking on the lands, touching the dark skies, causes a general panic. The appearance of the devastated and burned by the French troops of Zaragoza, the artist’s hometown, hit the painter.