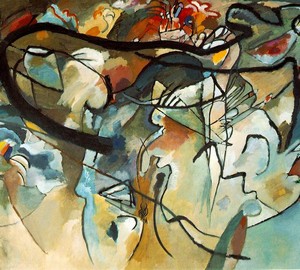 Impressions, improvisations and compositions are the three forms that Vasily Kandinsky relied on, finally breaking the connection with subject painting. And although its abstractions are often accepted as spontaneous drafts, such a simplified perception is erroneous. Each composition of the artist is a carefully verified work endowed with semantic load through form, color and their combinations. Composition V … is no exception

The canvas was created in 1911, and the author has just begun the theoretical development of his meaningful abstractionism. The main idea of the picture is consonant with the justification of his work as a whole – these are variable gradations of colors and tones, tangible sounds surrounding a person, then sweeping by, then falling down, all this is subject to the movement that flows in its metrhythm.

This composition, like its predecessors (IV and the first three, which were preserved only in the form of photographs), and its followers (VI-X) are a fixation of the impression, but not momentary, but deeply meaningful and felt, thoughtful.

The central element in the work is the line to which the author gives a detailed justification in his treatise “Point and Line”, even comparing it with sound. In general, the author has repeatedly made an attempt to draw identical parallels between form, color and musical sound. And although these attempts were not successful, Kandinsky’s paintings seemed to be filled with sound. Amazing! What is Composition V? Probably, everyone should answer this question himself, because every work of art is intimate and subjective in its perception.