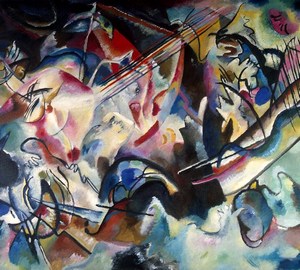 His paintings are not given to many, if not to say that it is difficult for anyone, however, to find another such master whose art would be so attractive and mysterious at the same time. This is all about the great Basil Kandinsky! Composition No. 6 is one of a number of similar works, distinguished by individuality and color-figuring narrative.

The canvas was created in 1913 in Munich, where Kandinsky, together with a friend Franz Mark, created the Blue Horseman art association. Initially, the author wanted to give the name to the canvas – “Potop”: as his goal he saw the implementation of the famous biblical plot, grand and dramatic, through pointless painting.

Later, Kandinsky abandoned the idea of giving the name of his sixth composition, claiming that there would be no more gross mistake than labeling the canvas. The author wanted to give the viewer the opportunity to build without being tied to any program.

It is amazing how through form and color, the artist managed to convey all the dynamic drama of the canvas – bends of lines have their own rhythm, and color spots soften their especially sharp accents. The image appears before us in the form of living, seething matter. And, it seems, our view is already able to distinguish between the outlines of the ship and the animals drowning in water flows, feeling the whole horror of the elements …