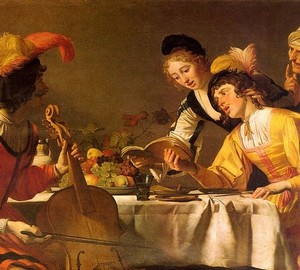 Concert – Gerrit van Honthorst. Around 1626-1630. Oil on canvas. 168×202
Dutch artist Gerrit van Honthorst (1590-1656) studied painting in Rome in the first half of the 1610s, when there was at the zenith of the glory of the recently deceased Caravaggio. Therefore, his paintings are marked by the influence that the art of the master had on him. It appeared both in choosing a topic (in the young years, Caravaggio loved to portray musicians), and in a picturesque solution to the scene, which was characteristic of his already mature work.

In this picture, in a room illuminated by a ray of light falling from somewhere in the upper window, a company gathered around the table is depicted: a smart and even pretentious musician plays the viola da gamba, and the young man and girl sing, holding notes in their hands. The artist endowed the participants with an impromptu concert with a variety of emotions: the music one looks at the singing, the young man is immersed in singing, the girl looks concentrated in notes, on her face is the seal of inspiration, and the old woman who is visible behind probably wants to insert her word.

But Van Honthorst would not be a Dutchman if he had not introduced a comic shade into the canvas: a girl touching the song simultaneously reaches her hand to the young man’s ear, trying to take off his earring, the old woman probably advises her how to do it more imperceptibly, and even cooked a wallet. And the musician therefore “clap his face” so much that the fun company arranged a concert only to rob the rich poor fellow. The second meaning, hidden in the usual genre scene, turns the picture into a small story.