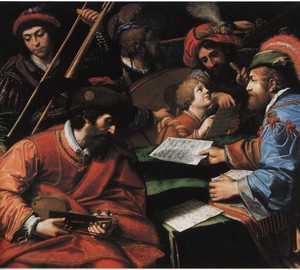 Concert – Lionello Spada. Around 1615. Oil on canvas. 138×177
The artist of the Spada studied painting at the Bologna Academy, but, visiting Rome, Naples and Malta, those cities in which his senior craft colleague Michelangelo Merizi da Caravaggio lived and worked, were influenced by his work, which was not similar to the academic art of Bologna masters.

In this picture, the painter depicted preparations for the concert. The head of the small ensemble distributes the scoreboard, the vocalist boy looks inhaled at one of the musicians, the rest of the participants in the upcoming performance set up tools. The action takes place in a dark room where light pours, revitalizing colorful robes, – a technique that rises to the painting of Caravaggio. But if he has a precisely directed magical light that reveals drama in the depicted, then Spada has more scattered lighting and makes the scene cozy.

The main thing that his follower took from Caravaggio is the desire to express the truth of life, although representatives of the Bologna picturesque school also gravitated to this in their own way. But the Spada did not inherit either a dramatic and extremely honest view of the reality that was characteristic of Caravaggio, or the exaltation and academicity of the Bolonians. However, in the picture reigns that light, laid-back mood that was inherent in the early work of the first.

In the world around him, the Spada knew how to catch and transfer to the canvas a cheerful and light noise that sounds like music to him. The moment of setting up the tools was probably more interesting for him than the concert itself, since it made it possible to present a live scene and portray characters in different states.