“Construction of the railway”, Vasily Pukirev – overview of the painting 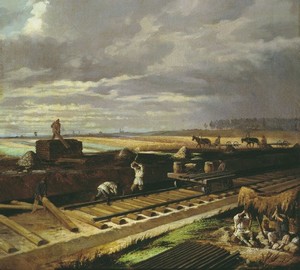 The construction of the railway is Vasily Vladimirovich Pukirev. Oil on canvas. 84 x 63 cm
The picture depicts peasants laying rails. Now the work is stored in the Nizhny Novgorod Art Museum, so it can be assumed that the heroes work on the Moscow-Nizhny Novgorod Railway, which was laid in the early 1840s.

On the upper part of the canvas is a gray-blue sky, drawn in clouds. Below you can see the railway itself and the workers, and in the background – arable land, a forest and peasants on horses. The faces of the workers are not visible to the viewer, but the artist conveys the complexity of their work through postures: the characters are somehow inclined, holding any weights.

Vasily Pukirev lived at a time when railways in Russia were just beginning to be built. In society, these projects – more precisely, their implementation – have caused a great resonance. The country was embraced both by the enthusiasm for the progress and novelty of these enterprises, and by the horror of how monstrously, practically without paying for labor, they forced defenseless and disenfranchised peasants to work.

At the same time, the railways violated the usual order of life and killed the wealth of nature: in the picture of Pukirev, construction work was as if opposed to forests and fields – the pride of Russian land.