“Creation of clothes from Christ,” El Greco – overview of the painting 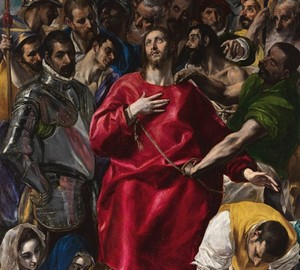 In 1577, El Greco was trying to gain a foothold in Toledo. He longs for popularity and demand. One of his first orders here was a picture of a very rare religious plot – they pull off clothes from Christ before sending them to the cross. The cathedral ordered the picture to be located in the central place where it is still located.

The work turned out to be very narrative and emotional. In the center of the composition, El Greco placed Christ. He is dressed in bright, red, free hiton. The crowd surrounds the Savior with a dense ring and it seems as if the figure of Jesus is involuntarily floating in this raging stream of fierce or, conversely, indifferent faces.

One warrior prepares the cross, scoring nails into the tree, the other brought his hand over Christ to tear off his clothes. In the foreground, in the lower left corner, the viewer sees three women who seemed to freeze, falling into a daze, looking at the brutal murder weapon – the cross. These are the three Marys who came to lead Jesus to execution.

Some do routine work, others suffer, and only the martyr himself does not pay attention to what is happening. His eyes are raised high into the sky with humility and prayer, and the face seems to glow from the inside. The face of Christ stands out sharply against the background of the soldiers, because their author of the picture depicted in darker colors, emphasizing that their souls are immersed in darkness, while the soul of the convict convicted person for execution is enlightened and pure.

It is worth noting that the painting was not liked by the Toledo clergy. In their opinion, El Greco retreated from the important religious canons of writing the Savior. In particular, the figure of Christ is below some other heroes of the picture, while tradition provided that he rise above all. However, despite the murmur of orthodox, the canvas was exhibited in the cathedral, which only increased the fame of El Greco, providing the talented master with many orders.