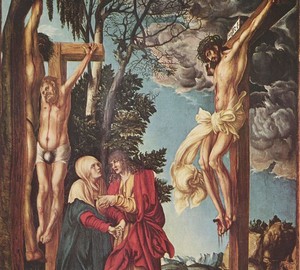 The Renaissance has introduced new interpretations into popular stories, such as the crucifixion of Christ. Lucas Kranach demonstrated his vision, revolutionary for his time. If earlier this scene looked monumental, static and majestic among the authors, then the German painter added to it a share of drama, expressed both in composition and in the coloristic decision.

Mary and Joan are depicted surrounded by three crosses, they are talking about something. Only the look of Mary makes the viewer look at the main character of the canvas – the crucified Jesus. The figure of Christ is located on the side of the picture, and this is a completely new compositional move, and besides, it is visible to the viewer of the whole turn.

The excited conversation between Mary and John is also something completely new, because before that the heroes only reverently looked at the Savior. The landscape also pays attention to itself – thickened clouds in the blue sky escalate drama and bring anxiety to the tragic Christian plot.