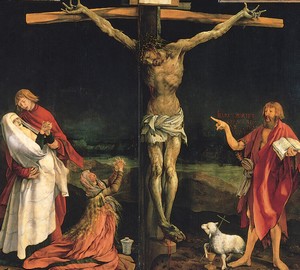 Crucifixion – Matthias Grunewald. The central part of the Isenheim altar.

The Crucifixion is part of the altar, the most famous surviving work of Matthias Grunewald, the brightest representative of the German Renaissance.

The order to create the altar came from the Order of the Antonites, a religious fraternity whose main task was to nursing and treat patients. Altar became the central work in the Isenheim Monastery. Researchers cannot tell the exact time of writing the work. The scene of the crucifixion of Jesus Christ Grunewald was depicted on the outer turn of the altar, in the middle. That is, basically the worshipers saw Christ, since in most cases the altar was in closed form, and they turned it only on certain religious holidays.

It is noteworthy that the “Crucifixion” is the largest picture in size, written in this plot among all similar works by the brush of European painters.

But not only size is Grunewald’s main achievement in this work. Never before was the scene on Calvary portrayed so dramatic and emotional. Death here is not so high (in its meaning) as painful and terrible. And the loved ones of Jesus are not at all humble and quiet in their sorrow – they are shocked, they literally faint.

The limbs of Christ are tormented by nails. Hands in pain are turned with palms to the sky, twisted and frozen in the last agony. The crown of thorns on Jesus’ head is larger than usual to see the viewer on other canvases, icons or crucifixes. Therefore, involuntarily the look goes over to the face of Christ – his face is exhausted, covered with blood, and the mortal blue has already touched his lips. On the body of the martyr you can notice terrible purulent abscesses.

Following the canons, the Mother of God left the master on the left side of the crucified son, but the Virgin Mary does not grieve – she literally fainted from the suffering experienced. A thorough study of the picture showed that Grunewald rewritten the figure of Our Lady many times, but dwelled on the most dramatic version (in the early versions, she looks at her son with her hands folded in the prayer). The lost feelings of Mary was picked up by the apostle John – he is one of all not looking at the crucified. You can also not help feeling the extreme despair of Maria Magdalina, who pulls her folded hands to Jesus.

In the picture you can see John the Baptist, although by that time he was no longer alive, and he could not be a witness to this dramatic scene. This is an iconographic canon denoting the continuity of John and Christ.

Why did Grunewald so shockingly accurately depict the man who accepted death through crucifixion? The artist wanted to arouse compassion in the viewer, so that every parishioner would feel the New Testament tragedy with all the emotional intensity. This is the exact visual embodiment of the plot familiar to believers, sometimes turning into a kind of faceless formula, “Christ on the Cross.”. Looking at the work of Grunewald, one can accurately feel both pain and despair, and inhuman torment, and the sadism of the executioners.