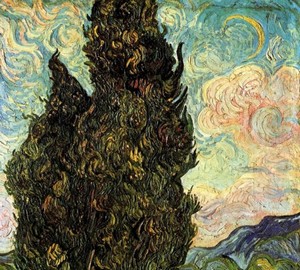 At the end of April 1899. Van Gogh suddenly decided to go to a psychiatric hospital, where he was allowed to continue painting. It was at this time that the artist wrote the famous cypress trees, which struck him so much that he spoke of them: “…beautiful as an Egyptian obelisk. ”.

Displaying a green tree, especially its dark crown, called Van Gogh “black spot in a sunny landscape”, proved to be a difficult task for a painter. The artist used in the image of cypress trees the same means of artistic expressiveness that he usually used to reproduce the human figure. Such a move, in addition to giving special significance to the cypress trees, gives them, in fact, human characteristics. It seems that Van Gogh was very pleased with his work. In one of the letters to Brother Theo, he described it as follows: “The trees are huge and powerful. The first plan with blackberry bushes and a undergrowth is very low. Behind – purple hills, green-pink sky with moonlight. “.