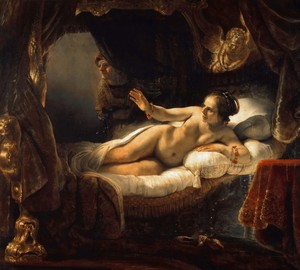 The recognized masterpiece of the Dutch artist Rembrandt (1606-1669) “Danaya” was written based on the myth of Danai, the mother of Perseus. The girl’s father learned from the prophecy that he would die at the hands of his son Danai, imprisoned her in a dungeon and put a maid to her. This did not stop the supreme Greek god Zeus, who penetrated the prisoner in the form of golden rain, after which she gave birth to a son. The picture attracts attention with a special “rembrandt” flavor. The combination of flickering tones of the curtain, bedspreads and tablecloths with the inclusion of golden glare is striking in its beauty and sophistication.

The body of an naked woman lying in bed is highlighted by bright pouring sunlight falling due to a shifted maid’s lane. Danae rose and hesitantly pulled out her hand towards the light. Her divine lover is about to appear. In the image of Danai, Rembrandt captured the features of his wife Saskia. After her death, they were changed and supplemented by the features of the new beloved woman of the artist. Rembrandt also rewrote the laughing angel in the head of the bed, now he is crying, obviously, for the departed.

The fate of the work turned out to be difficult: in 1985, a crazy vandal who visited the Hermitage, threw sulfuric acid from the bottle to the center of the picture, and then twice stabbed the canvas. Damage affected almost 30% of the work, and restoration lasted twelve years.