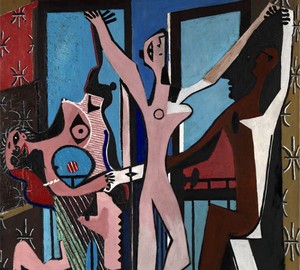 The painting “Dance” conditionally marks the beginning of the surreal period of Picasso’s work. The author’s manner is expressive, even bordering on aggression and there is a reasonable explanation for this. It was then that relations with the artist with his first wife, Russian ballerina Olga Khokhlova, reached their limit point – the pair will soon part, disappointed with each other.

The center of work depicts three dancing figures – in the middle of a girl, a fatal muse. Two men, taking her hands, move, obeying some unbridled mysterious metrhythm. The bodies of all characters are divided into fragments, combined with ornaments and angular lines. In the background, you can guess the exit to the balcony with a slightly opened glass door.

Later, Picasso explained the meaning of this picture, putting an end to numerous interpretations and disputes. According to the author, he depicted the Dance of Death, a wild dance, devoting the picture to two friends who voluntarily left this world because of undivided love. The fatal beauty broke two hearts, destroying lives and not gaining her happiness. And if one of the heroes is Carlos Casagemas, the names of the rest of the dancers can only guess.