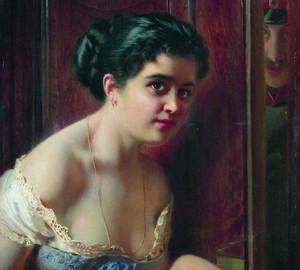 During his creative career, Konstantin Makovsky tried many styles, genres, techniques and compositional constructions. Surprisingly, when you look at the work of an artist of different periods, you can’t immediately believe that they all belong to the brush of one master – Makovsky was very different and multifaceted.

The presented work was completed in 1866, and it can be attributed to the portrait and to the genre scene. The young author has already gained rapid popularity as a talented portrait painter, and the image of the heroine in the painting “Date” corresponds to the main stylistic characteristics of the Makovsky portrait painter.

The figure of the girl speaks against the background of darker scenery (in this case it is an open door), and this clearly shows the influence of Karl Brullov and Ilya Repin; the appearance is full of tenderness and restrained dignity, and matte skin is an example of filigree ownership of luminaries transmitted by overflows of soft colors on the girl’s open shoulders. Another sign of the author’s female portraits is saturated cherry lips, which we can notice in the charming heroine, preparing to meet with her beloved.

“Speaking” are the eyes – large, deep, and also meek and at the same time curious, they convey the whole state of the lady. Still would! After all, through a small gap of the open door, we see her guest, and this is a young man with a gulfed mustache and a military uniform. The audience became an involuntary witness of their secret date, and the maximum approximation of the heroes to the edge of the canvas makes us completely accomplices of this romantic moment.

Surely, the plot of the picture corresponded to the spiritual mood of Konstantin Makovsky himself – in the same year he was married to the artist of the drama theater, the beauty Elena Burkova. Their marriage was very happy, albeit short-lived.

It should be noted that the brother of Konstantin, Vladimir, also wrote a picture with the same name. Only the plot of this picture is far from positive. Watch the picture of Vladimir Makovsky “Date”